The Museum of Kraków is introducing restrictions on the operation of all branches in December 2022 - an obligation imposed by the "Law on Special Solutions to Protect Electricity Consumers in 2023 in Connection with the Situation on the Electricity Market" of September 29th, 2022. More information in the NEWS tab.
Can we store cookies? It will help you get the best possible experience from us but it is up to you to decide whether to decline or accept them.
The Podgórze Museum, a branch of the Historical Museum of the City of Krakow, is an exceptional place. It is being created at the initiative of the local community and is an answer to the expectations of the Podgórze residents. They themselves, as well as other residents of Krakow, are participating in the co-creation of this place, through donating their memorabilia and sharing their recollections, as well as through active participation in informational meetings about the project, organised periodically by the HMK.
The planned permanent exhibition, In the Shadow of Krak’s Mound, will present the history and the phenomenon of Podgórze – a multicultural and multinational town, its spectacular industrial success, as well as its mythology and legends.
In addition to organising exhibitions, the branch will also carry out educational work. One of the most important aspects of the museum’s operations, however, will be the integration of the Podgórze community. It is intended to become a kind of meeting centre for the local community.
The museum’s activities will encompass all of the right-bank Krakow, while the theme of the permanent exhibition will focus on the historic town of Podgórze.

Concept of the Podgórze Museum permanent exhibition – In the Shadow of Krak’s Mound
The permanent exhibition will take up the ground floor of the St Benedict Inn on Limanowskiego Street – four rooms and vestibule, plus a room on level -1, with a total area of approx. 294 m2. The exhibition will present the history of the areas belonging to the town of Kazimierz, located on the right bank of the Zakazimierka River, where the town of Podgórze was established in the late 18th century, the history of the town itself (1784-1915) and the later 12th District Podgórze, which is currently part of the expansive 13th district of Krakow. The history will be presented in a chronological and issue-oriented layout, from the Early Middle Ages until modern times. In addition to historical artefacts (including authentic documents, military, engravings, illustrations, drawings and photographs), the exhibition will also feature models, installations, digital reconstructions and multimedia presentations.
The main focus of the exhibition is the place that, in less than 100 years, transformed from a suburban farming settlement with industrial potential into a modern town, inhabited by an aware, progressive community; a town that was intended to be Austrian, but instead became the place where the process of Poland regaining its independence in 1918 began.
There will of course be a place in the exhibition for the residents of Podgórze and local social activists, in whose minds the idea of the Podgórze Museum was born and is coming into fruition. They will share their recollections with visitors in the form of spoken history. This part of the exhibition will continue to grow after the opening – the residents of Podgórze will have a chance to record their own recollections.

In every ground floor room and the vestibule, there will be presentations of the most important socio-cultural, economic and political issues that had a significant influence on the shaping of the cultural image of Podgórze and its legacy, currently visible in the surviving witnesses of the bygone times, but also affecting the contemporary historical awareness of Krakow’s residents. Part of the exhibition is the children’s path, which is an integral part of the overall exhibition, also including the educational room on level -1. Each of the rooms has been given a name and was divided into thematic zones.

Before the entrance to the touring path is the Intro Zone.

INTRO ZONE – contains basic information about the exhibition and a timeline of the history of Podgórze, as well as a contemporary plan of the Podgórze 13th District.

VESTIBULE divided into 3 zones:
1. Galicia
2. Remembrance
3. History of the site

ROOM III: TOWARDS FREEDOM divided into 5 zones:
1. The merger of Podgórze and Krakow
2. Bridges
3. Podgórze in the defensive organism of the Krakow Fortress
4. Independence came from Podgórze
5. Between the wars
In room III, the so-called Contexts have been distinguished: the November Uprising, the Krakow Uprising, patriotic education, the Grey Ranks, the Solidarity strike in the Unitra-Telpod plants.

ROOM IV: THE TIME OF PODGÓRZE divided into 2 zones:
1. The exiled and forgotten town
2. The time of Podgórze – distinguished subjects: a/ Recovering memory, new identity, b/ Participation, c/ “Publicity”

The EDUCATIONAL ROOM: THE ALCHEMY OF THE TOWN – A LABORATORY FOR CHILDREN, which is an integral part of the children’s route through the permanent exhibition, will be located on level -1. This will be a kind of “laboratory of the town”, where the youngest visitors will be able to analyse and preserve the knowledge they acquire during their visit to the permanent exhibition. We are planning to arrange the room modelled on a scientific laboratory, where researchers of various historical sciences work. All descriptions and commentaries to the materials will be translated into English, so that foreign visitors (for whom the exhibition is also intended) can actively tour it with their children.

The permanent exhibition will present the history of Podgórze through various exhibition objects, graphic design and sound. Dozens of receivers mounted throughout the exhibition will present knowledge to visitors in the form of spoken history and audio reports. The exhibition will be adapted for people with disabilities, including those with impaired vision and hearing. Information about the exhibits will be made available in Polish and English. The placement of points where spoken history and audio commentary can be obtained will make it possible for interested visitors to expand their knowledge on their chosen topic. Seats will be placed along the route. 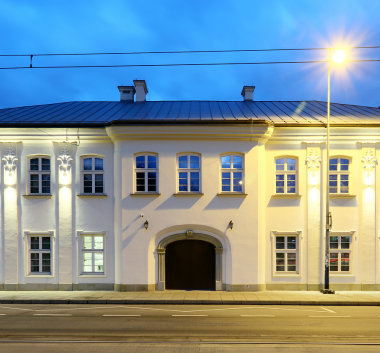