The Museum of Kraków is introducing restrictions on the operation of all branches in December 2022 - an obligation imposed by the "Law on Special Solutions to Protect Electricity Consumers in 2023 in Connection with the Situation on the Electricity Market" of September 29th, 2022. More information in the NEWS tab.
Can we store cookies? It will help you get the best possible experience from us but it is up to you to decide whether to decline or accept them.
Description of the exhibition

The permanent exhibition at the Eagle Pharmacy is located on the site of the former ghetto and commemorates the Holocaust of Krakow's Jews and the figure of Tadeusz Pankiewicz, a Righteous Among the Nations.

The basis of the exhibition's scenario are the memoirs of Tadeusz Pankiewicz, the pharmacy's owner and a witness to the events, first published shortly after the war in the book “The Krakow Ghetto Pharmacy.” The exhibition occupies all the rooms of the former pharmacy. The original utilitarian functions of the various rooms provide a basis for analysing threads from the history of the ghetto, the figure of Tadeusz Pankiewicz and his associates, Irena Droździkowska, Aurelia Danek-Czortowa, and Helena Krywaniuk.

In the customer room, you will learn about the history of the place and the people; in the prescription room, you will discover a variety of prescriptions for survival in the ghetto; in the on-call room, you will meet Tadeusz Pankiewicz, a witness and chronicler of the Holocaust; in the storage room, you will experience the atmosphere of the Pharmacy as a meeting place and shelter for ghetto residents. Finally, in the lab you will confront the post-war history of memory and oblivion of Krakow's Jews.

The pharmacy's staff witnessed the act of destruction of the centuries-old history of Krakow's Jews by the occupiers between 1941 and 1943. It is the merit of Pankiewicz and his associates that they were not indifferent to human suffering, helped those in need, and after the war testified to the tragic events that took place in the Krakow ghetto.

The Tadeusz Pankiewicz Pharmacy in the Kraków Ghetto exhibition consists of six parts presented in former pharmacy rooms. Unfortunately, after the liquidation of the pharmacy in the 1960s., its furnishings were also destroyed. The furniture, pharmacy equipment and utensils that are now in the museum have been reconstructed on the basis of surviving documentation and witness accounts. The authors of the exhibition tried to reflect the character of the decor of the Eagle Pharmacy as closely as possible, and along the reconstructions, you can see original items from the period and several objects from the former Pankiewicz pharmacy that have been found. The exhibition is complemented by films, multimedia presentations, photos and documents related to the history of the pharmacy as well as the history of the ghetto and the Holocaust of Krakow's Jews. The authors relied on Tadeusz Pankiewicz's memoirs “The Krakow Ghetto Pharmacy,” accounts from the Holocaust collected in the archives of the Emanuel Ringelblum Jewish Historical Institute in Warsaw, the Yad Vashem Institute in Jerusalem, and other memoirs, diaries, and testimonies of the time, as well as audio and video notations.

The primary key to discovering the exhibition is the pharmacy and the recreated layout of its interior. The place, furniture and pharmacy equipment are carriers of information, through which the visitor can reach the history hidden in them. Just as the most important activities of the pharmacy during the war were carried out in secret, so now the visitor must do the work of finding the right contents. The drawers of the pharmacy furniture hold the informative part of the exhibition: exhibits, photos, and documents. It is the viewer's task to find them, and piece them together with their knowledge and memory of the time.

The new exhibition at the Eagle Pharmacy also serves as the museum's research, publishing, and education program. A comic book about the history of the pharmacy, a biography of Tadeusz Pankiewicz, and a history of medicine in the ghetto have all been published as part of it.

Finally, the Eagle Pharmacy is a very important part of the museum's 1939-1956 Memory Trail, visited annually by several hundred thousand people from all over the world. The project implemented at the Pharmacy closes the process of creating and revitalising museum exhibitions in the branches along the Memory Trail, while at the same time opens the field for educational, scientific, and exhibition activities related to the history of Krakow during the German occupation and the post-war period. 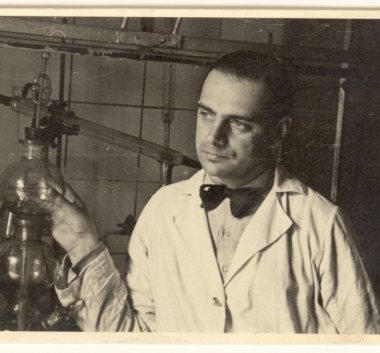