The Museum of Kraków is introducing restrictions on the operation of all branches in December 2022 - an obligation imposed by the "Law on Special Solutions to Protect Electricity Consumers in 2023 in Connection with the Situation on the Electricity Market" of September 29th, 2022. More information in the NEWS tab.
Can we store cookies? It will help you get the best possible experience from us but it is up to you to decide whether to decline or accept them.
The German Nazi Concentration Camp in Krakow-Plaszow, established in October 1942, initially served the purpose of a labour camp (Zwangsarbeitslager). It was originally intended for c.a. 4000 prisoners – the Jews from Krakow’s ghetto which was closed in March 1943. At that time the camp covered 12 ha of the land formerly occupied by the cemeteries of Krakow and Podgórze Jewish Communes. It was in 1943–1944 that the Jews from the closed ghettos in Bochnia, Tarnow, Wieliczka, Rzeszow, Przemyśl and the camp in Szebnie were imprisoned here. In July 1943 the Germans established an “educational” labour camp for the Poles. The people detained there were Krakow citizens and the victims of the pacification of villages near Krakow.
In January 1944 the camp was transformed into a concentration camp (Konzentrationslager Plaszow bei Krakau). KL Plaszow was also a transit camp for the Jews from Slovakia and Hungary transported to KL Auschwitz. Prisoners from the camps in the districts of Lublin and Radom had been transported there as well since spring 1944. From KL Plaszow prisoners were transported to labour and concentration camps in the General Government within the Third Reich area.
It is estimated that throughout the period of the camp activity c.a. 30,000 people were imprisoned there, and the approximate number of its victims is 5,000. These are the victims of executions carried out in three execution places within the camp area. Prisoners from Krakow’s Gestapo prison were shot dead there as well.
In the peak period (mid 1944) the camp area was inhabited by c.a. 25,000 prisoners, and c.a. 200 buildings were situated there. These were prison and production barracks, utility buildings, camp infrastructure buildings, houses and flats occupied by the crew. At that time the camp area covered 80 ha. August marked the beginning of KL Plaszow camp liquidation. The Germans started transferring prisoners and the camp infrastructure (some barracks, workshop equipment, etc.). It was on 14th January 1945 that the last group of c.a. 600 prisoners of KL Plaszow left the camp on foot heading Oświęcim. From 18th January until October 1945 the Red Army was stationed in the camp area, devastating the former camp area. On their withdrawal, the camp became available for anyone, and the devastation process was advancing. In 2016 we can only find sparse traces which indicate the existence of KL Plaszow. 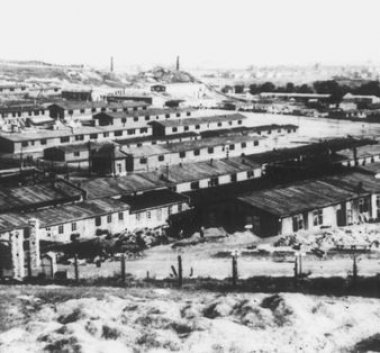 Newsletter
What information do you want to receive?