Ladies and Gentlemen, we would like to inform you that on August 15 (Monday) all branches of the Museum of Krakow will be closed.
Can we store cookies? It will help you get the best possible experience from us but it is up to you to decide whether to decline or accept them.
The exhibition can be seen at the Museum of Nowa Huta (in the former Światowid cinema)

Many myths have been created around the shelters located under the city of Nowa Huta. One of them states that below the whole of Nowa Huta there is another underground city, where it is possible to move around without coming up to the surface...
It is still possible to meet people today who claim to have entered the underground in one neighbourhood and left it in a completely different district. Also, rumour has it that under the former Światowid cinema (currently the seat of the Museum of Poland under the Communist Regime) there was Nowa Huta’s largest shelter designed for several hundred people. All shelters in Nowa Huta were, allegedly, built to protect its residents against a nuclear attack.
We decided to take a closer look at all these urban legends. We wanted to discuss the circumstances surrounding the construction of the majority of shelters below Nowa Huta – the political climate of the 1950s in Poland and abroad, the Cold War, the arms race, as well as the real threat of the outbreak of World War III, and how the authorities used it for propaganda purposes. Although an open conflict between the East and the West was at some points of the 20th century very likely, the communist authorities deliberately demonised this threat. In the face of a common enemy, it was much easier to unify the nation, and the vision of war allowed to justify the often criminal actions of the Security Service (SB), aimed at any and all symptoms of resistance, with their efforts to protect the country.Today, for most visitors of the Museum of Poland under the Communist Regime, the shelters are only a historical curiosity. The story of over 250 protective structures located under Nowa Huta’s blocks of flats, schools, kindergartens, health centres and cultural institutions seems to appeal to the human imagination. Yet, it is difficult to forget about them in a very contemporary context. The Russian invasion of Ukraine and the helplessness of international communities meant that a “new Cold War” was being openly mentioned while we were working on the exhibition.
Therefore, our story is also a warning against paranoia, which paralysed global international relations for decades and caused a lot of misfortune. We hope to steer clear of it for good. 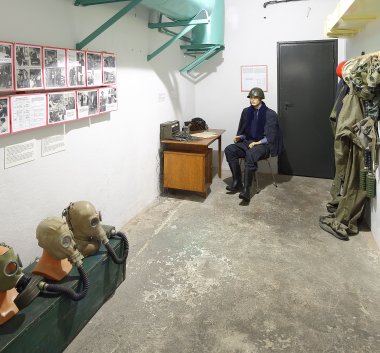