Ladies and Gentlemen, due to the current epidemic situation, all branches of the Museum of Krakowwill be closed on November 7 - January 31, 2020. We invite you soon!
Can we store cookies? It will help you get the best possible experience from us but it is up to you to decide whether to decline or accept them.
Permanent exhibition entitled The Fowler Brotherhood OF Kraków and City Defenses is currently presented in two rooms: Bracka and Strzelecka.
Sala Strzelecka (approx. 320 m²), split down the middle by a neo-Gothic colonnade, largely recreates the nineteenth-century appearance of this room, with the frieze made from the portraits of Krakow's Fowler Kings dominating the ceiling. Below the portraits, historical paintings and tondi show the major events from the Brotherhood’s history. The symbol of the Brotherhood and the most important insignia of the Fowler King - the silver fowler was placed in the middle of the room, against the background of the former exit to the shooting range. In front of the fowler, the unique abdication gifts of "bird rulers" (so-called "jewels”) are presented. The showcases on the side contain valuable brotherhood souvenirs, e.g. silverware - a gift from Emperor Franz Josef I and other cups and trophies. The insignia of the royal marshals and the fraternity’s authorities, i.e. the president and vice presidents, were showcased separately: scepters, canes and chains. The history of the brotherhood also includes two books: a memorial with entries informing about the most important events, and the Royal Book, where Fowler Kings have been putting their entries since the 19th century until today - presented open at the current entry of the Bird Ruler in office. The cabinets along the western wall show examples of weapons and firearms used by the city’s defenders, that is, the Fowler Brothers throughout the society’s history.

Sala Bracka (approx. 60 m²) documents the latest history of the Shooting Society, i.e. since the end of World War II to present day. Since the Brotherhood continues to write its contemporary history, this part of the exhibition is the most often to change. This room also stores souvenirs documenting the attachment to the Catholic faith and Christian culture, and especially the Society’s close and cordial relationships with the Holy Father John Paul II - an Honorary Fowler Brother. A number of gifts donated by the Society’s chaplain prelate Jerzy Bryła, e.g. a chasuble and a cross.
In 1998, the collection was supplemented with memorabilia of European shooting brotherhoods, a gift from the Presidium of the European Federation of Shooting Brotherhoods (EGS). The Brotherhood’s collection at MHK is constantly being supplemented with new souvenirs, which are being systematically sent to the exhibition.
The current exhibition refers to the arrangements from 1997, 2012, with elements of later changes and new items in an arrangement referring to historical presentations in Sala Strzelecka - a representative hall in the historical seat of the Fowler Brotherhood.
The exhibition is complete with the Entrance Hall showcasing the collection of shooting range targets from competitions for the title of the Fowler King from the turn of the 20th and 21st centuries, up to this year’s.

The most precious jewel of the Brotherhood is the Silver Fowler.
It is a high-class masterpiece of craft. A stately bird made of silver gazes with a mysterious ruby flash of precious stones embedded in its eyes. The rooster’s gaze holds many secrets: both the name of its creator and its founder. The mysterious aura created around the silver bird triggered imagination and contributed to the creation of a vibrant legend passed on for centuries.
This outstanding work of craft was made at the turn of 1564 and 1565 by an unknown, probably Krakow-based, goldsmith. Its maker, undoubtedly a talented artist, made the magnificent bird with a height standing 41.5 cm tall and weighing 3.6 kg. With a crown on its head, it resembles an eagle than a cock that it really originates from. The Silver Fowler is the most prized possession of the Fowler Brotherhood, which it received in 1565. The Rooster’s handover to the Shooting Society is associated with a legend, saying that the Polish King Zygmunt August himself gave the silver bird to the Brothers. This alleged event was even immortalized in a 19th-century painting by Władysław Łuszczkiewicz. However, the facts are different. It was Krakow city authorities who gave funds to make the bird's image. The Krakow magistrate decided to carry this expense in connection with the reorganization of the Krakow-based fraternity, which received a new statute and shooting ordinance, constituting the organizational and legal basis for the functioning of this shooting society. These changes were reflected in the silver fowler, where the names of the then selected society authorities were engraved under the footer. The silver fowler is not only a symbol of the organization, but also the passing insignia of power for the next Fowler King. 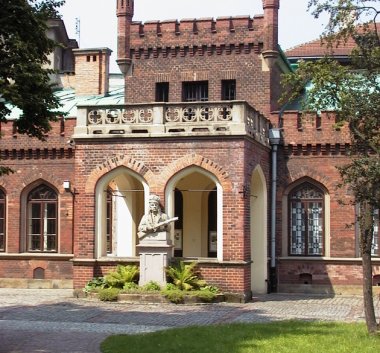 Localisation
ul. Lubicz 16, 31-054 Kraków phone. 12 431-75-90 e-mail: celestat@muzeumkrakowa.pl
See on map Go to the branch page
Newsletter
What information do you want to receive?