The Museum of Kraków is introducing restrictions on the operation of all branches in December 2022 - an obligation imposed by the "Law on Special Solutions to Protect Electricity Consumers in 2023 in Connection with the Situation on the Electricity Market" of September 29th, 2022. More information in the NEWS tab.
Can we store cookies? It will help you get the best possible experience from us but it is up to you to decide whether to decline or accept them.
This time the protagonist of the exhibition in the former Światowid cinema will be Central Square. Central Square, which, in the opinions of many Nowa Huta residents, but not only, is the heart of Nowa Huta. But is it for sure?

It is precisely the question about the “centrality” of Central Square that the authors of the exhibition try to answer, pointing out this issue already in its title (Central Square. In Search of the Centre). However, they let visitors answer this question.

Without getting into a discussion about whether or not Central Square is the centre of Nowa Huta, there is one thing we can say for sure: it is an extremely important place for Nowa Huta residents. The authors of the exhibition emphasise this fact, while recalling the history of the planned change of the square's name. In 2004, Krakow councillors proposed changing the name of Central Square to Ronald Reagan Square. It didn’t take long for the public to react. The residents formed the Committee for the Defence of Central Square, and their actions helped to establish a mutually satisfactory compromise. On September 8, 2004, the councillors adopted the official name of the place: R. Reagan Central Square. But listening to the daily conversations of Nowa Huta residents, you will continue to hear the usual name “Central Square” or, in short, “Central”.

The exhibition will feature many archival photographs, paintings and drawings showing Central Square and its immediate surroundings. There will also be everyday items that could be bought in stores around the square, such as Cepelia, a bookshop, a stationery shop, Moda Polska, a philatelic shop, and home furnishings shop.

The visualisations presented constitute a part of the entire project. So the choice is dictated by the desire to draw public attention to the heart of Nowa Huta – Central Square. In fact, students developed designs for the space covering almost the entire “old Nowa Huta” together with the Nowa Huta Meadows.

The works show different approaches, a different understanding of urban space, and different design sensitivity. However, what they do have in common is the desire to integrate individual interiors and to create a coherent network of public spaces with a clear contribution of the factor of greenery as well as pro-ecological and pro-social solutions. 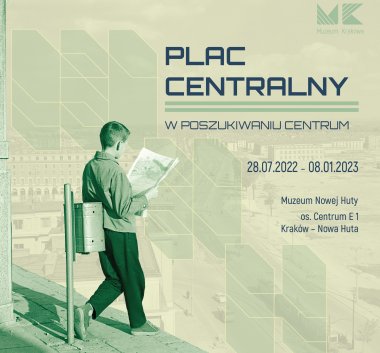