Can we store cookies? It will help you get the best possible experience from us but it is up to you to decide whether to decline or accept them.
Opened on 24th September 2010 was the “Following the traces of European identity of Kraków” tourist route. The establishment of this interactive exhibition was made possible thanks to the archaeological study that was conducted continuously from 2005 to 2010, on the eastern side of the Main Market Square. Discovered at the time were an abundance of traces of the many centuries of history of the site. To accommodate them, an archaeological reserve unique in Europe, covering nearly 4000 sq.m (43,000 sq.ft), was fashioned under the surface of the Main Market Square to provide a display for the treasures that had been found and narrate the turbulent history of Medieval Kraków.
The Rynek Underground exhibition presents not only Kraków’s rich history, but also the connections between the city and mediaeval Europe’s chief centres of trade and culture. Moreover, it portrays the significance of the capital of Poland in the operation of the Hanseatic League. The real historical objects on display, just to mention 14th-century coins, decorations, and pottery, are proof of the European cultural and trade exchange that continued here incessantly for hundreds of years. The tourist route under the Main Market Square leads between the stone and brick walls of the cellars of former trading sites, including the Kramy Bolesławowe Stalls, Kramy Bogate Stalls, the Great Scales, and the Cloth Hall. Another curio is the preserved stretches of transport routes, which provide an idea of what the mediaeval technology of road building was. The untouched layers in archaeological section explain how the surface of the Main Market Square has risen over the last few hundred years.
Numerous objects make it possible to imagine daily life in Kraków a few centuries ago. The exhibition shows, among others, mediaeval tools, historical coins, clay figures, decorations, dice and toiletry articles used over 600 years ago, together with the Tartar arrowheads, and beads and medallions from the Orient. Especially commanding is the slab of lead – a highly precious metal at the time – weighing 693 kg (1528 lb), the only such item in the world, locally known as a “loaf”. Visiting the tourist route in the Rynek Underground, one can also become familiar with the history of Kraków from before the foundation of the city. The oldest history of the site is exemplified by reconstructions of 11th-century burials presented in the exhibition. A picture of the pre-charter settlement destroyed during the Tartar raid of 1241 emerges from the original foundations of cottages from the late 12th and early 13th century, and reconstructions of goldsmith’s and blacksmith’s workshops.
Visiting the exhibition, you can get to feel the atmosphere of a mediaeval market. While visiting, we are accompanied by the hubbub of bargaining. Moreover, the exhibition is enriched with interesting models and multimedia – touchscreens, holograms, projections and documentary films presented in the spaces of the cellars under the Cloth Hall arranged especially for that purpose. With the youngest visitors in mind, a special playroom and mechanical theatre showing the legend of the bygone Kraków were created. 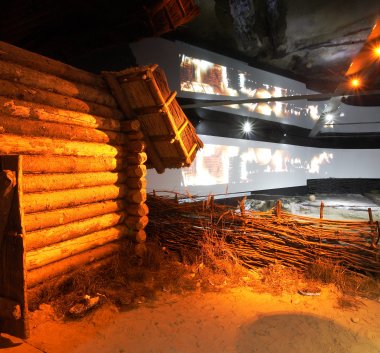