The Museum of Kraków is introducing restrictions on the operation of all branches in December 2022 - an obligation imposed by the "Law on Special Solutions to Protect Electricity Consumers in 2023 in Connection with the Situation on the Electricity Market" of September 29th, 2022. More information in the NEWS tab.
Can we store cookies? It will help you get the best possible experience from us but it is up to you to decide whether to decline or accept them.

A permanent exhibition is the Pomorska Street branch – People of Kraków in Times of Terror 1939-1945-1956 - is a story about the similarities between the two totalitarian systems: the Nazi and the communist. During the war the words: Pomorska Street meant the same as the Gestapo, terror and fear.
In the Śląski House thousand people were interrogated and tortured. The inscriptions on the walls of the cells – which are the main centre of the exhibition – give the testimony of their suffering.

The exhibition in the Eagle Pharmacy – Tadeusz Pankiewicz's Pharmacy in the Kraków Ghetto – is dedicated to the annihilation of the Kraków Jews. The Eagle Pharmacy, run by Tadeusz Pankiewicz, was the only pharmacy, functioning in the Ghetto during the World War II, and its owner was the only Pole, who had the right for permanent residence within the Ghetto. It became a meeting place for Jewish intellectuals, scholars and artists living in the Ghetto – a place of salvation.

The exhibition Kraków under Nazi occupation 1939-1945 is a journey through the city and time. It is a story about Kraków and the fate of its Polish and Jewish citizens during World War II, but also about the Germans – occupiers, who violently interrupted the centuries-old history of Polish-Jewish Kraków. The great history of World War II intersects here with everyday life, private life – with tragedy, which struck the whole world. The exhibition is a theatrical, film and multimedia narrative.

This Place of Remembrance will be developed at the site of the former German Nazi labour and concentration camp, which operated between October 1942 and 14 January 1945. Approximately 30,000 prisoners were imprisoned in the camp. The estimated number of those murdered in the KL Plaszow camp is approx. 5,000. In mid 1944, the camp had more than 20,000 prisoners and included about 200 buildings spread across 80 ha. Some of the latter included prison and manufacturing barracks, utility buildings, camp infrastructure buildings as well as staff homes and apartments. Red Army soldiers were stationed there between 19 January and the end of 1945. Following their withdrawal, anyone could enter the site of the former camp and thus a process of devastation ensued. Currently, the site provides an open-air exhibition entitled ‘KL Plaszow’. 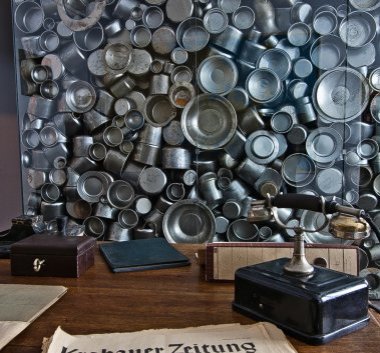