We inform that the Visitor Centre is in the Krzysztofory Palace, 35 Main Square.
Can we store cookies? It will help you get the best possible experience from us but it is up to you to decide whether to decline or accept them.
During the 2nd World War there was the Gestapo headquarters in Krakow, at 2, Pomorska Street. The cells of the previous Gestapo prison – the testimony of the past of this place – nowadays are the place of national memory and the most important point of the upcoming exhibition. The exhibition People of Kraków in Times of Terror 1939-1945-1956, telling the complex history of our city, prepares the visitors to see the cells, where Polish people, fighting for Polish freedom and independence, were tortured and murdered.
The exhibition is divided into three parts. The first one presents the activities of the Association of Defence of the Western Borderlands as well as the history of the Silesian House. The second part show the fate of chosen people – both Krakow citizens and persons connected with Krakow - the victims of the German terror during the Nazi occupation in 1939-1945. The third part of the exhibition is devoted to the period of 1945-1956 and presents various attitudes of the population against the people’s power imposed on the Polish society.
People of Kraków in Times of Terror...  are a story about the similarities between the two totalitarian systems: the Nazi and the communist. This inhuman world will be presented to the visitors by means of the persons from the Gestapo and the Security Office. This exhibition is also a story of the ordinary people, citizens of Krakow, who lived here in this highly turbulent and tragic period in Polish history.
Documents, family souvenirs and photographs form the narrative of the Krakow citizens in 1939–1945 and 1945–1956. The documentary is complemented by the elements of stage design, including the arranged interrogation room, as well as the audiovisual presentations or recordings of the witnesses.
One of the most important elements of the exhibition is the innovative project of the Historical Museum of Krakow – “the virtual archives”. Information about the victims of Nazi and Stalinist terror, collected by the museum employees over many years, were made available to the general public in the form of an electronic database. Owing to the collected documents and photographs, the visitors will have the opportunity to get accustomed with the curriculum vitae of a selected person. The database currently consists of several thousand items and will be expanded in the future. With the version available in the Internet the collection will be accessible for the family members of the oppressed people, as well as for the investigators of the recent history.
The past has to hurt sometimes. Nevertheless, it has to be remembered.
The branch of the Historical Museum, located at 2, Pomorska Street in Krakow is not only an exhibition, but it is also a space for social dialogue – the exchange of ideas and views on our common, and not so distant, history.
This place, along with Oscar Schindler’s Enamel Factory and the Pharmacy under the Eagle, creates the Remembrance Route of the Historical Museum of Kraków. These three points on the map of Krakow are the three complementary stories about the war and the time that came after the war. 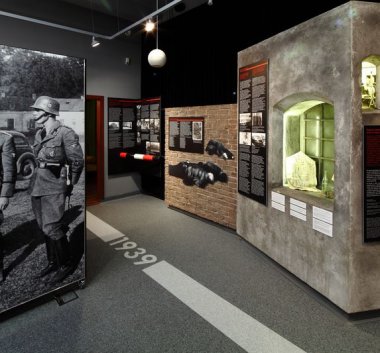